After a few weeks of “papierkrieg” we finally started into a prototype fund funded 6 months of HubGrep development!

This is the first post in a series of status update posts, published (hopefully before) every second monday.

what we have done

A big part of this first week was actually getting an overview of what we need to do over the next months, so we made ourselves some trello / kanban boards:

Next, we set up a small low-tech nerd time tracking: text files in a git repository. :)

Also, since there was a lot of paper involved until the funding started, we made ourselves a little document management system: a small bash script which runs ocr on our scanned pdfs, making them searchable with a tool like ripgrep-all.

We already started to make a small frame for a flask application, wrapping our cli search tool in a web service. Now we added a first real HTML version to it, and startet a general development setup.

A sneak peek on our first attempt to a frontend: 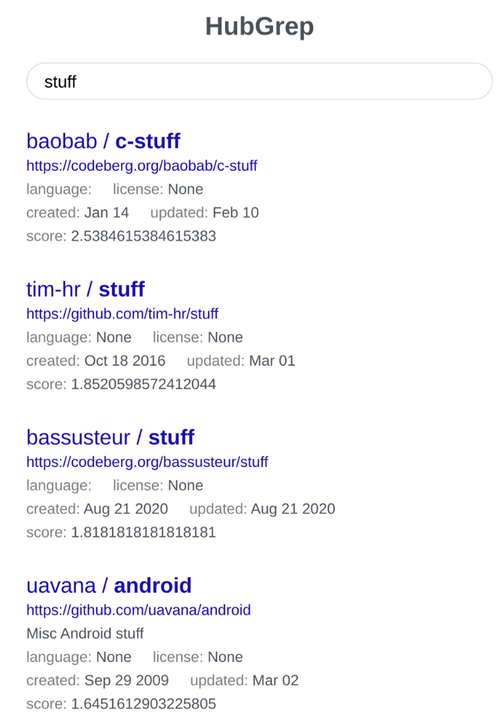 what we are doing

I hope most of what involves sending physical paper around is over now and we can focus on acual programming.

That said, we are in the middle of our first milestone, setting up parts of our dev environment, and adding basic functionality to the service.

I want to complain about the paperwork, needed to get the funding, once more. :)
I have a “normal” job next to this, and i found this really exhausting to manage. I tend to have all of this stuff in the back of my head until its finished (even if i write down what i have to), and thinking about it all the time really sucks. If i did not have friends who are familiar with that kind of stuff, i would probably have been pretty lost in all this. (Thank you, Carolin. :) )

…But i guess i just hate all those formalities.